Watpac Construction has been appointed to build the hotel following the announcement of the head contract today.

The hotel, located on Grenfell Street in the heart of the Adelaide CBD, is being developed by Hines Property and will be managed by global hotel group Accor following an extensive, worldwide operator selection process.

"To win a project of this calibre in such a competitive market is a strong endorsement of Watpac's skills and experience in delivering high quality, high profile projects," Mr Monro said.

"Watpac permanently established operations in South Australia two years ago. Today, we are in the process of delivering three projects worth $140 million and our fourth tower crane will soon be operating in the Adelaide skyline.

"Our expert local workforce, backed by a healthy balance sheet and 30 years of leadership in the national construction sector, makes us well placed to capitalise on new opportunities as they arise."

Hines Property Managing Director, James Hines, said the Ibis Adelaide will be the first purpose-built economy hotel to open in Adelaide in more than two decades and the first internationally branded hotel of its type.

"The Ibis mega-brand is owned by Accor, one of the world's leading hotel operators, and their involvement in the management of the hotel is a testament to the calibre of the project and its prime location," Mr Hines said.

"The Adelaide hotel market has a predominance of older style properties operated at the four and five star level and there is an evident gap in the market for both new hotels and those which are operated at the premium economy level.

"Traditional hotels have so many underutilised guest services and facilities which ultimately increase room rates charged to guests. At Ibis Adelaide we won't be offering shoe shine services and room turn downs but we will be offering a hotel of high quality and design.

"By limiting services to those which are essential to our guests we will be able to offer extremely competitive and compelling room rates in an excellent location which is ideal for both corporate and leisure travellers.

"It will also complement the significant level of private and public sector investment already underway in the city's burgeoning tourism sector, particularly the Adelaide Oval upgrade and the Convention Centre expansion which are both scheduled for completion next year." 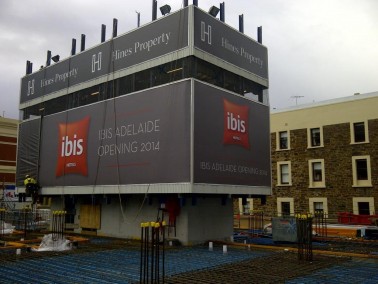 Chief Operating Officer Accor Pacific, Simon McGrath, said the group is delighted to be introducing its international Ibis brand to Adelaide with a purpose-built, premium hotel development in the heart of the city's retail and commercial precinct.

"Ibis hotels are vastly superior to their 3-star counterparts of just a decade ago, with the brand offering premium bedding, contemporary design and outstanding use of space at a genuine economy price," Mr McGrath said.

"We believe the exceptional design and location of the Ibis Adelaide will appeal to both the corporate and leisure travel markets and we're looking forward to welcoming our first guests in 2014."