The national prize was presented to Ibis Adelaide General Manager, Jeremy Samuels, at a ceremony in Sydney on Friday 3 June 2016. Ibis Adelaide triumphed over other category finalists including Brisbane Airport Corporation and the Melbourne and Olympic Parks Trust.

The $70 million development undertaken by Hines Property and managed by AccorHotels under its Ibis brand opened in July 2014 and is the largest hotel of its chain in Australia with 311 rooms. The hotel interiors feature artworks by street artist, Ghost Patrol, and its edgy design can be seen in its use of statement colours and LED lit multi-coloured staircase.

The hotel’s staircase is award-winning in its own right, receiving the 2015 Australian Glass and Glazing Association’s Design Award for its glazing. Ibis Adelaide also won Best Economy Hotel in Australia at the HM 2015 Awards.

Hines Property Managing Director, James Hines, said “For an Adelaide project to win a national Property Council of Australia award is a tremendous achievement, and one which we are incredibly proud of. As a local property developer, we are immensely humbled to be nationally recognised for our contribution to tourism and leisure development.”

The annual Property Council of Australia Innovation and Excellence awards celebrate the best and most innovative projects and developments across the country.

The is the second time a Hines Property hotel development has won this award, with the 308 room Crowne Plaza Adelaide hotel winning the same category in 2012. 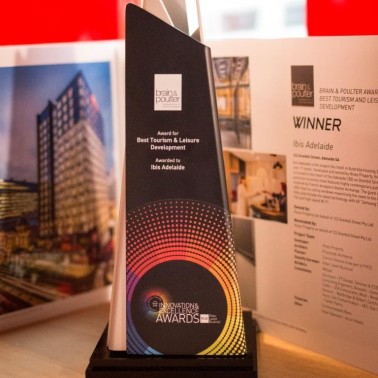