The UDIA judges said the building achieved new standards of sustainability and technology not previously applied at such a scale in a residential and office mixed use building in Australia. They also noted the commercial advantage of the building's environmental credentials.

UDIA SA president Mr Ian Marker said the calibre of entries this year had made deliberations difficult for judges.

"Hines Property Group's Conservatory on Hindmarsh Square deservedly took out awards in both the High Density Development category and the President's Award."

The Conservatory was also recommended by the judges to advance to the National UDIA Awards, to be announced in Sydney in March, 2010.

The Conservatory was also a finalist in the national BPN Sustainability Awards announced in Sydney late last month.

Hines Property director, Mr James Hines said recognition of the project both in South Australia and nationally was pleasing for the Group. 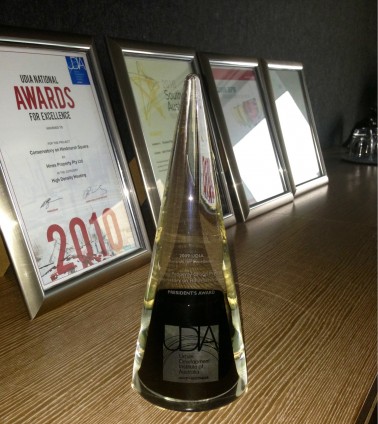 Hines Property is also close to completing Adelaide's largest private construction project – the $150 million 20 Hindmarsh Square development comprising a 15-level, 89-apartment tower and a 16-level, 308-room hotel to be operated as Crowne Plaza Adelaide. More than 80% of the apartment tower has already been sold, and the hotel opening scheduled for April, 2010 will be timely to capture the benefits of Adelaide's shortage of quality hotel accommodation.